Life according to society

Getting married, having children, buying a house and landing a dream job are all key milestones that many of us look to achieve – but people in the UK feel under pressure to have done this all by the time they turn 31.

In an exclusive survey exploring ‘life according to society’, Legal & General has quizzed adults over 25 to find out what they feel they ‘should’ do and where their social pressure comes from.

Our survey shows that people think you ‘should’ be married by 29. That’s despite the fact that the average age of a bride in the UK is 35.1 and a groom 37.5, suggesting people feel big pressure when it comes to their relationships. There’s even a suggestion that this age is continuing to grow – with the trend increasingly moving away from the perception of our respondents. 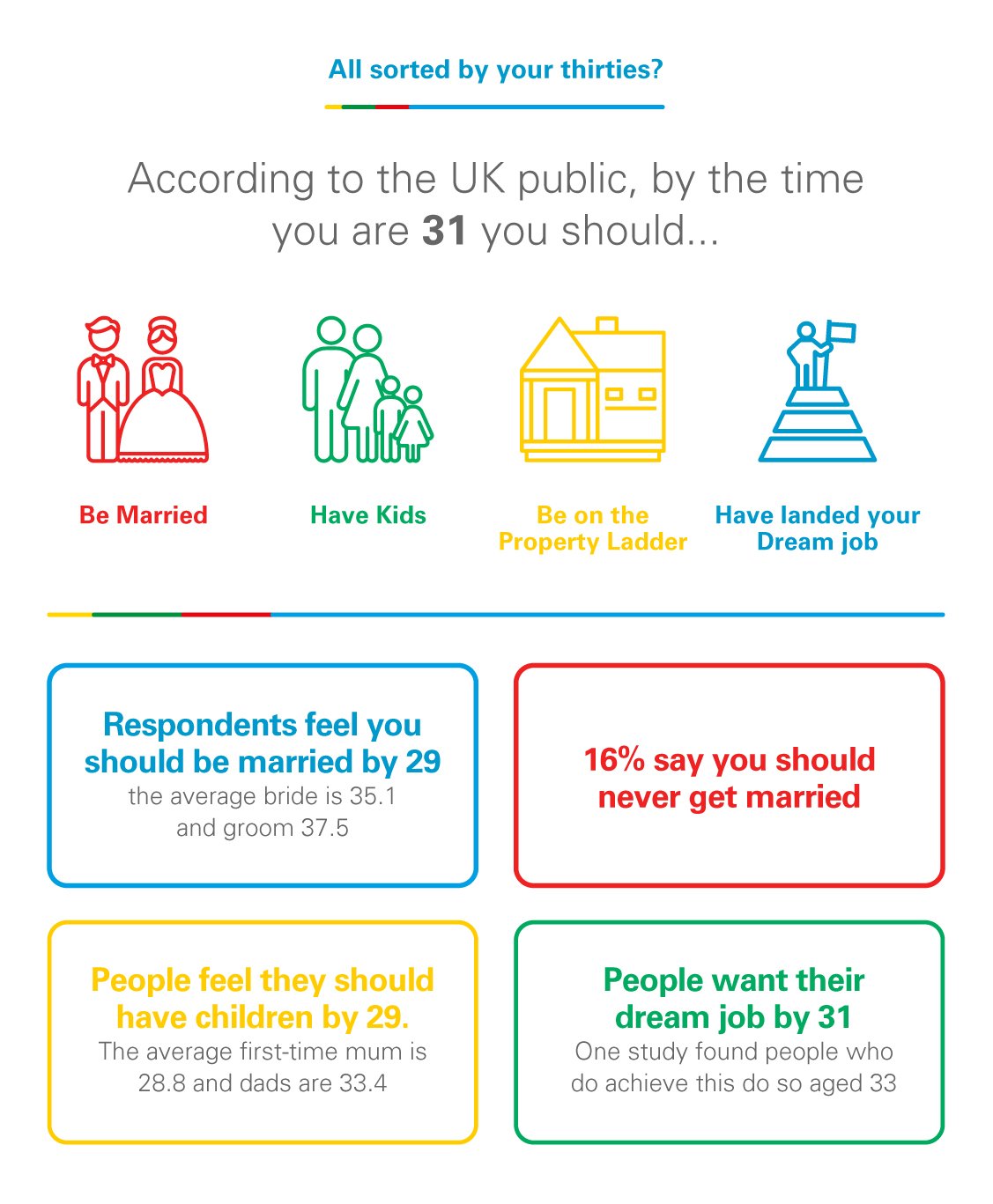 The race to buy your first home

At face value, it would seem more realistic that people feel they should be on the property ladder by 30 given that the average age of a first time buyer is 31. However, look below those numbers and you’ll see two factors that reveal how this social pressure doesn’t reflect the reality of trying to get on the housing ladder in modern day Britain.

Firstly, our survey shows that 46% of people feel you should buy a house in your 20s – a feat beyond the means of most young people, especially in expensive cities such as London, and something that shows there is still significant social pressure to buy earlier than is possible. Indeed, speaking of the capital, it’s perhaps no surprise to see that people in Greater London were most likely to feel people should be on the property ladder later – with one in eight saying this should happen between 35 and 39. People in the West Midlands were most likely to suggest people should buy their first home between 20 and 24 (17% say this).

More illuminating still, it’s worth noting that the average age of a first-time buyer merely reflects those who are able to buy. The Institute of Fiscal Studies found that just 35% of 25-34s actually own a house. Tellingly, this is down from 55% in 1998. This suggests that almost two thirds of people are actually unable to be on the housing ladder at an age when they feel they ‘should’ have bought their first home. 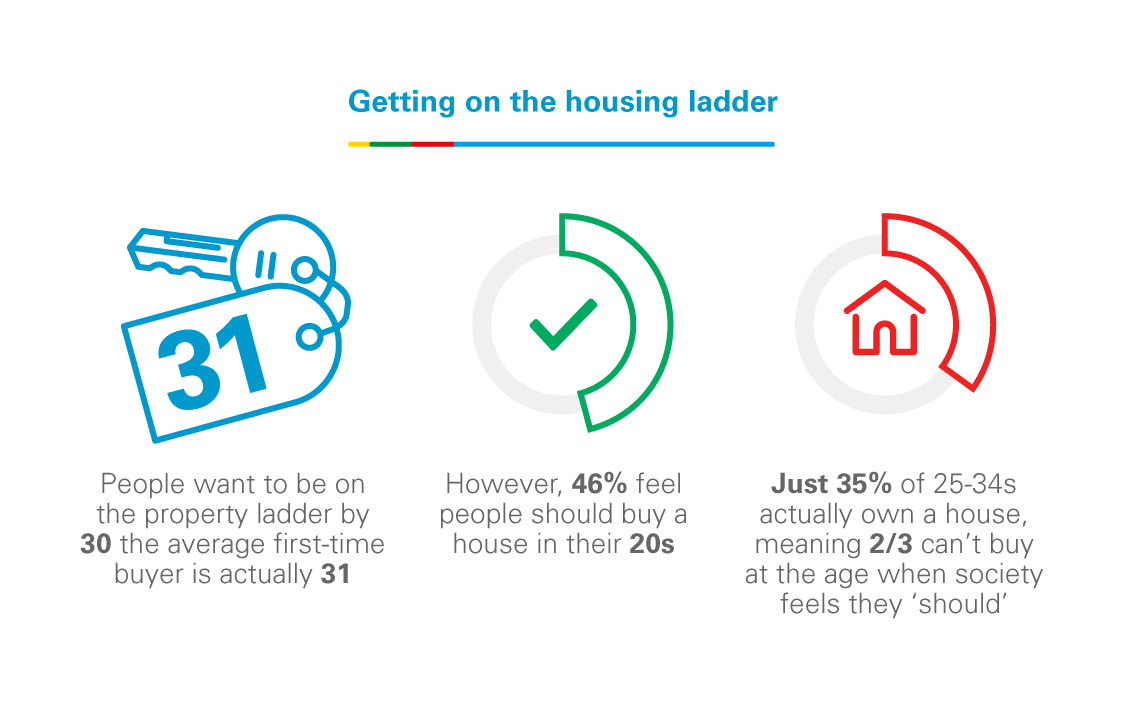 The generation game: How millennials feel most pressure

Our survey also revealed a distinct generational difference when it comes to feeling social pressure. Indeed, millennials are most likely to compare themselves to others – with 76% of 25-34s saying they compare themselves to friends either sometimes or all of the time. That sits in stark contrast with the 38% of over-55s and 54% of the population at large who say they do this.

In total, 65% of millennials compare themselves to work colleagues – which contrasts to just 36% of 45-54s.

For this age group, almost half (46%) feel that social media has increased the pressure on most people to reach milestones in life – that’s almost 20% higher than the national average who agree with this. Only 14.3% of 25-34s say that no form of social media post has an impact on what they should be achieving in their lives – the lowest percentage for any age group (47.7% of over-55s say they’re not influenced by any posts on social media). 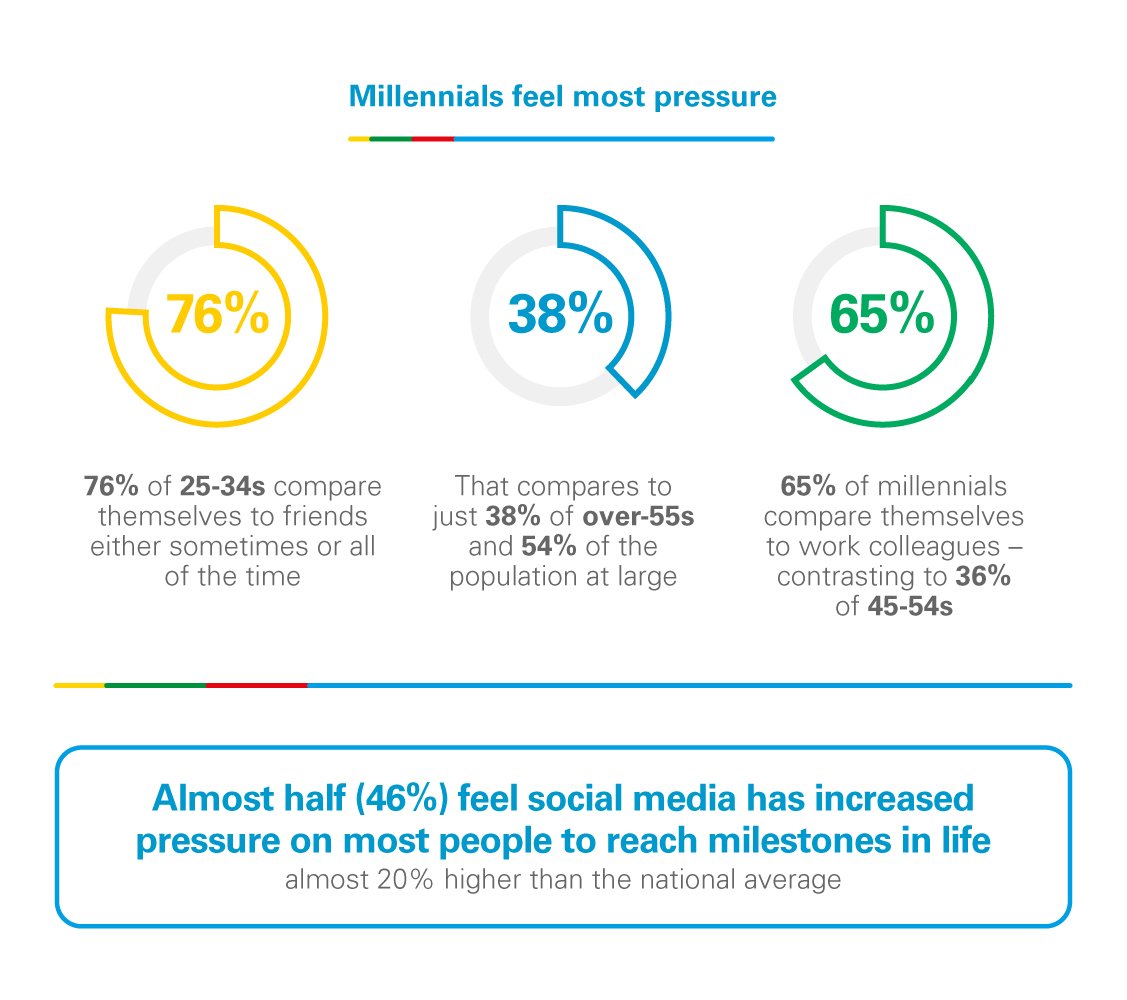 Friendly rivalry? How we compare ourselves to others 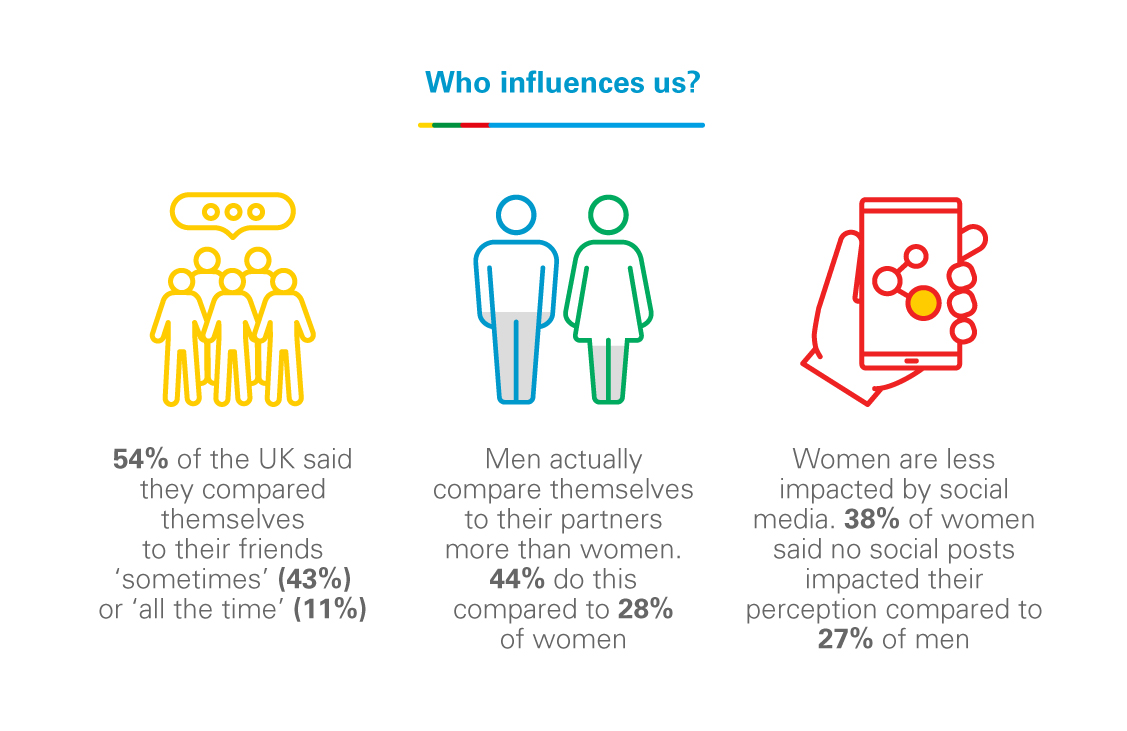 Interestingly, there are some big differences between men and women here. Men actually compare themselves to their partners more than women – with 44% of men doing this compared to 28% of women. Women are also less influenced by social media posts than men, with 38% of women telling us that no social media posts changed their perception compared to 27% of men. Men are also almost twice as likely to feel pressured to be in a relationship (16% to 9%).

The impact of social media

Our survey revealed which social media posts have the most impact on us when we’re scrolling through our feeds.

Top of the list were fitness posts, with about a quarter of people saying that these had the most impact on the perception of what they should be achieving. The power of fitness posts to inspire – or shame – us into donning our gym gear is shown in the rise of the UK gym industry – with more gyms and more gym members across the UK in 2018.

Second on the list were travel posts. Our sense of wanderlust is only heightened by seeing the holiday snaps of friends or influencers. 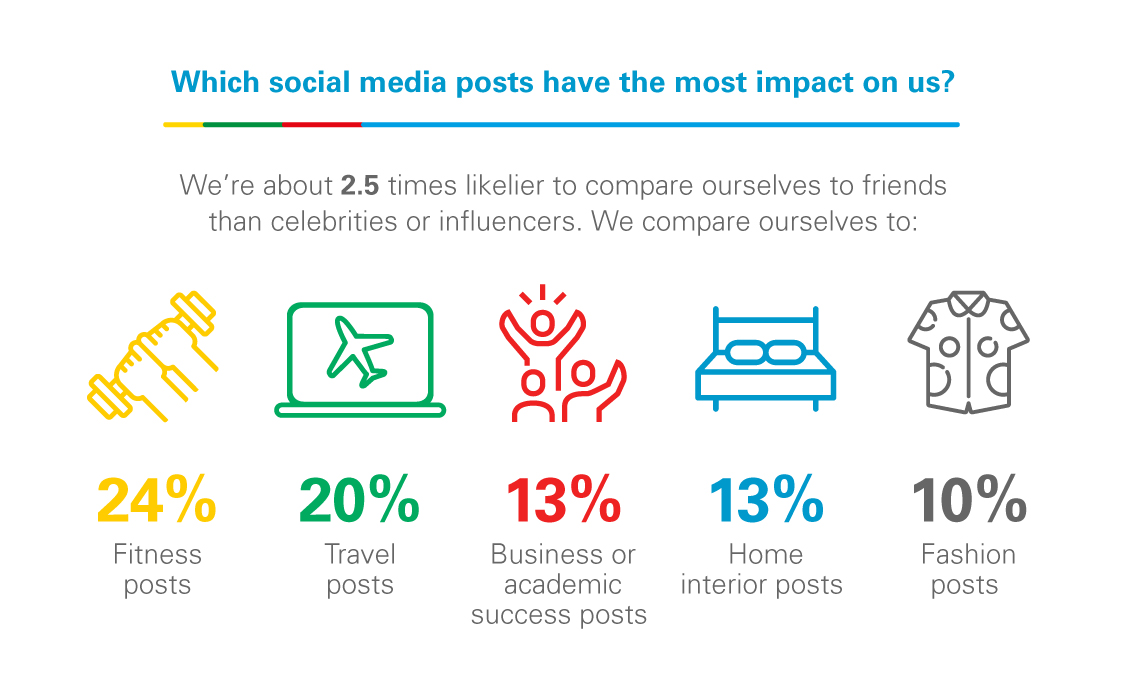 The personal milestones in life take time and focus to achieve – and that means some sacrifices. We asked the public what they’d be prepared to give up in order to achieve their goals. Top of the list was compromising social lives – showing people are most likely to put aside time with their friends to focus on their personal goals. Millennials were the most likely to suggest compromising their social life; 35% of 25-34s say this compared to 13% of over-55s.

After that, people told us they were prepared to consistently work overtime – something that perhaps helps to explain how more than five million people put in an average of 7.5 hours overtime a week. Again, overtime is more popular with millennials. About a third (33.4%) would work overtime consistently, compared to 18% of 45-54s and 11.4% of over-55s. Only 5.5% of 25-34s wouldn’t give up anything to achieve their goals – compared to 24% of over-55s.

Just below one in five people (18%) would move to a different city and about one in six (15%) would move abroad to fulfil their dreams.

Worryingly, one in ten men say they would put their mental health at risk in order to achieve their key personal milestone. That’s more than three times the proportion of women who said they’d do this and comes as men’s mental health is an increasing cause of concern. 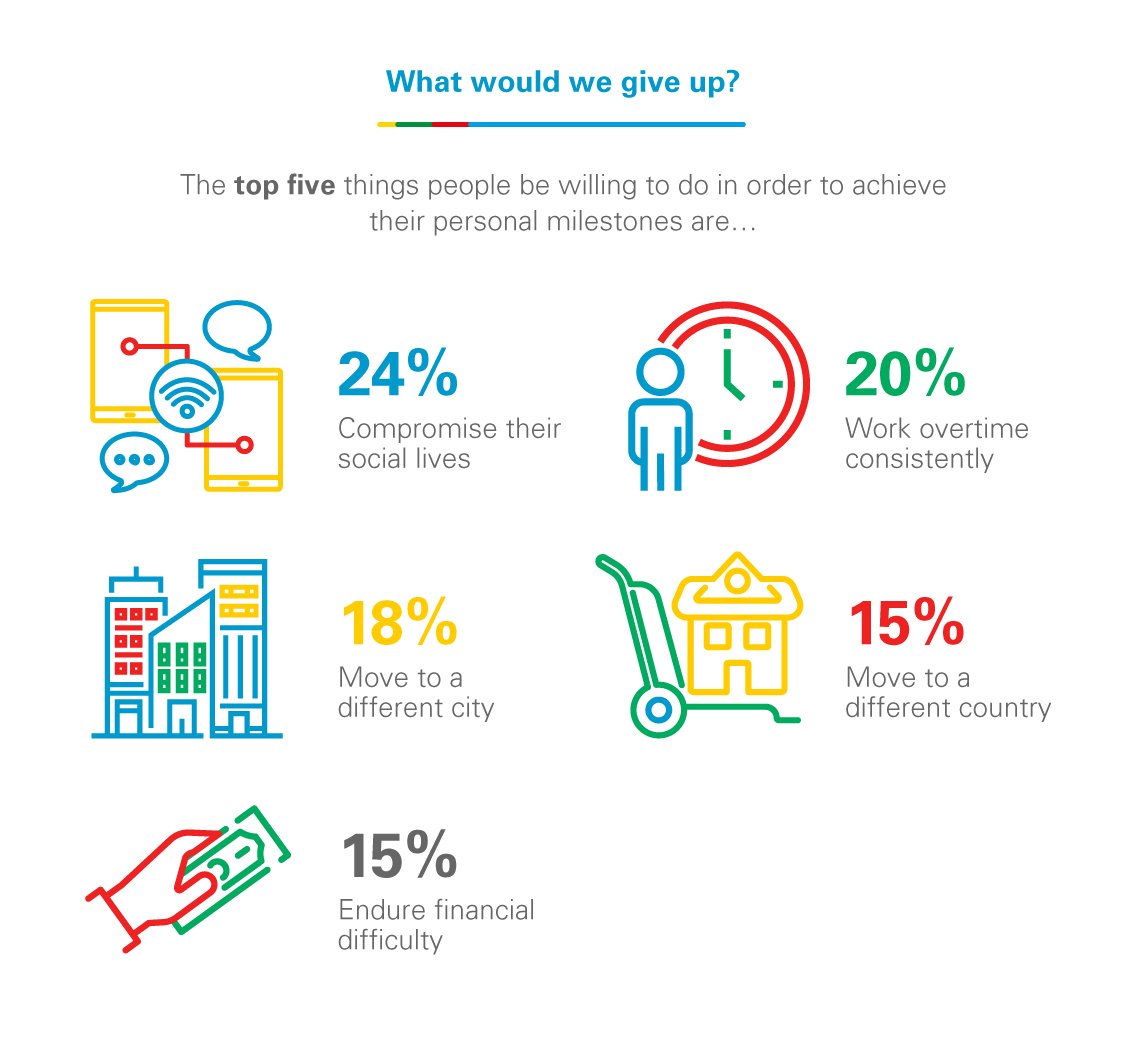 It isn’t just the big milestones in life that cause people to feel social pressure – we also feel the need to change our behaviour.

People feel most pressured to use less plastic – showing the rising passion to be green and the success of large scale campaigns ranging from protests to environmental documentaries and the drive to cut plastic bag use in supermarkets.

In our survey, 45% of people say they feel pressure to cut their plastic waste although women (50%) are more likely to feel this than men (40%).

That’s higher than the number who want to be more financially secure (37.5%) and successful at work (24%).

The desire to be green also shows in that ‘reduce waste’, ‘save electricity’ and ‘save water’ are the next three most common pressures people say they face.

People are least likely to feel pressured to get involved in politics – with fewer than one in ten people saying this. Almost one in eight people feel pressured to become a vegan or vegetarian – although that rises to nearer one in five people for 25-34s. 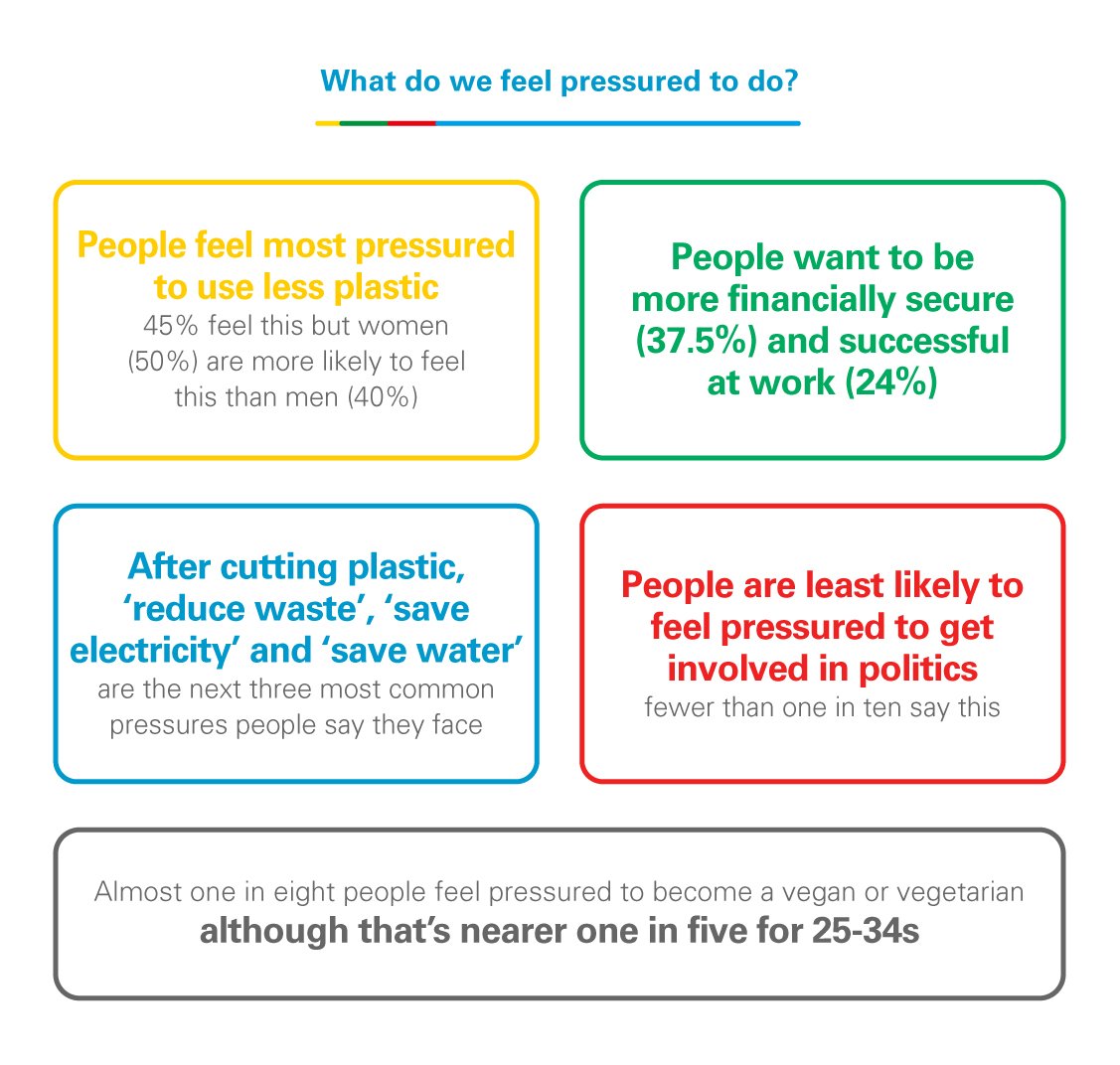 Our survey shows people place a big significance on turning 30. Once people have passed this landmark age and made it 31, they expect to have achieved all of life’s big milestones. That’s despite the fact that the reality is very different – with people getting married and buying homes later in life. It’s especially eye-opening to note that the majority of people aren’t able to buy a home by their mid-30s given the conditions of the housing market.

Legal & General commissioned Censuswide to poll 1,682 adults aged over 25 between 13/05 and 15/05 2019. Each respondent was asked eight questions about how they compare themselves to others, where and how they feel social pressure and what they feel social pressure to do. The results have formed the basis for the analysis above, with outside statistics and data from the below sources used to compare perceptions to reality and place the results into context.

There are so many things in life you can’t control. But one way one to put yourself in the driving seat is to get life insurance to cover you and your loved ones. And it doesn’t cost the earth, as you can get life insurance from £5 a month.