Cupid’s bow can strike at any time, but during these extraordinary times, looking for love hasn’t always been simple. From shuttered cinemas, pubs and restaurants, to social distancing in parks, the lockdown restrictions since 2020 have had a dramatic effect on dating. But when we finally emerge into a post-pandemic world, will our new virtual habits endure, or has the dating game changed for good? We spoke to 1,000 single people in the UK to get their views on love in lockdown.

The rise and fall of dating apps

Long before the pandemic struck, the digital revolution had transformed the dating world. Dating app Tinder has been downloaded more than 340 million times since its launch in 2012, and according to a November 2019 study by Imperial College London and eharmony, more than a third (32%) of relationships start online. If the trend were to continue, by 2035 a majority of couples will find one another on the web. But a lot has changed since the COVID-19 pandemic started, so we wanted to find out what Britons think today about dating apps. 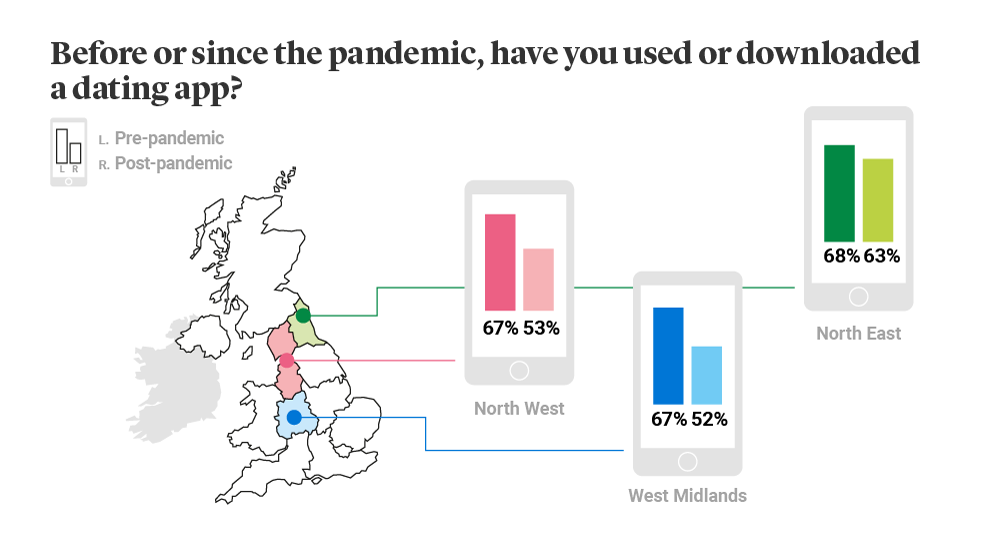 Many apps have responded to the pandemic by offering new features; for example, Hinge introduced a ‘date from home’ feature, allowing two users to signal when they are ready for a video call outside of the app, while Tinder made its Tinder Passport feature free for a month in April 2020 (and 2021), giving users the chance to change their global location to allow them to continue swiping if they were stranded outside of their home location, or had moved during the course of the pandemic.

But for all these innovations, we found that app usage hasn’t exploded during the pandemic in the way we might expect.

For many singletons, technology hasn’t yet replaced traditional ways of meeting someone. Just as dating apps haven’t been universally embraced, we discovered that less than a quarter (23%) believe that after lockdown restrictions end, they will still go on virtual dates.

If those looking for love have largely ‘swiped left’ when it comes to virtual dating, where have they been going on dates? Many single people have improvised during the pandemic, and we wanted to find out which places have been the most popular lockdown dating haunts. 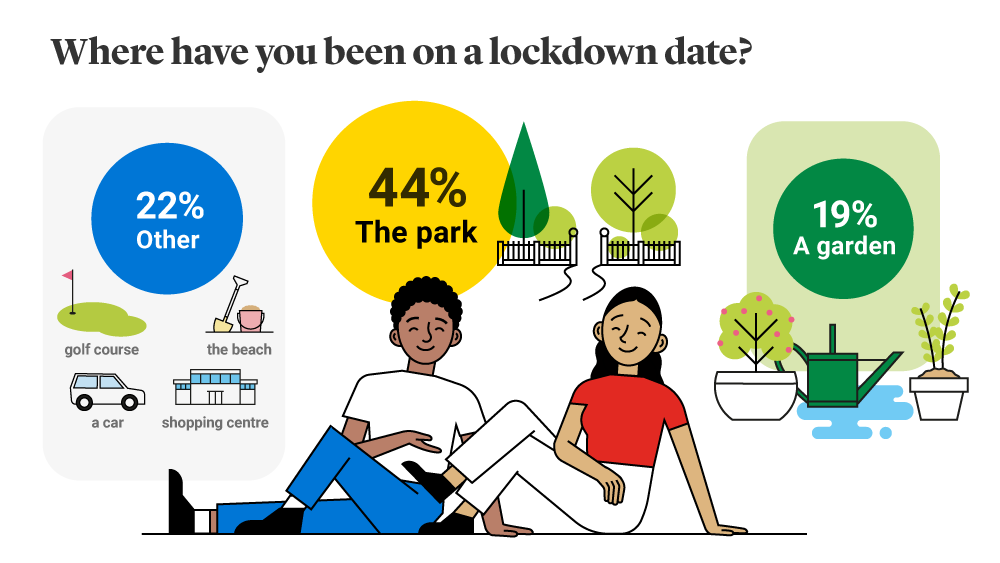 It’s perhaps no surprise that parks topped the list of people’s favourite places for a lockdown date. 18-24 year-olds were the most likely to have gone on a park date (48%) compared to 23% of over-55s. Edinburgh and Sheffield (both 53%) were the cities where singletons were most likely to have embraced park life in their love lives.

In second place was the ‘other’ category, which comprised everything from beaches and golf courses to shopping centres and cars!

But while parks, benches and doorsteps have been all the rage, have people changed their opinions on where they want to go on a post-pandemic date?

Restaurants were the most popular future date location – cited by 38% of respondents. This was the case across all regions, but was highest in Greater London (47%) and among those who’d been single for less than 6 months (47%).

But in a sign of possible changing habits, parks were the third most popular location for post-pandemic dating, with some of the highest rates among 25-34 year-olds (27%) and those who’ve been single for 3 to 5 years (27%). It looks like open air areas have made a lasting impression on lockdown daters.

In our survey, 16% of all respondents admitted to breaking lockdown rules to go on a date, rising to 20% among 16-24 year-olds, and 32% among people who’ve been single for 7 to 11 months. While the allure of finding love remains as strong as ever, perhaps single people deserve credit that the vast majority appear to have observed lockdown restrictions.

2020-21 has been a time where we’ve all had to get used to isolation in one form or another. And while our freedom to date in traditional ways has been curtailed, how does the public feel about single life in general? We found some striking results: 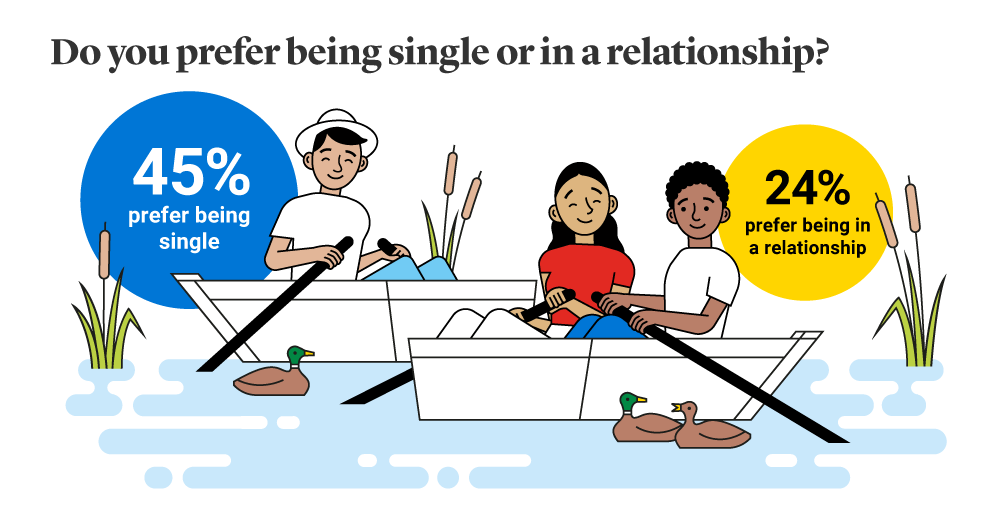 As the above shows, more people prefer being single than in a relationship (45% compared to 24%). This was the case across male and female respondents and all locations.

The trend was even more apparent among single people over 55; in this category, 50% prefer being single while 17% would rather be in a relationship. It appears singledom is popular across the board; in fact, the single versus relationship conundrum was only a close run among those who’d been single for less than six months – 38% said they’d rather be in a relationship, just nudging ahead of those who’d prefer to be single on 37%.

These results suggest that singletons aren’t universally ‘looking for love’, but in many cases are happy to live the single life – perhaps indefinitely – or bide their time before finding a partner.

We wanted to find out whether people’s dating priorities have changed given the pandemic. Our survey revealed:

But how exactly have people’s outlooks changed? While many are enjoying being single, it’s no contradiction that when they do seek a relationship, they’d increasingly like it to be a serious one.

As you can see, loyalty is the quality in a partner that people were most likely to select – totalling 47% of respondents. From our findings, we can reasonably conclude that many people are making mature and considered decisions about their romantic futures, and that lockdown has accelerated this process. While marriage rates are the lowest on record – according to the Office for National Statistics – the divorce rate is also the lowest it’s been since 1971. Everyone has different priorities, whether that’s settling down or living the single life, and our research presents an encouraging picture that people are thinking carefully about what’s right for them.

Theatres, cinemas and concert halls were once popular dating venues, and it’s fair to say their absence makes the heart grow fonder. But while the past year has been tough for many, the resourcefulness of singletons – from virtual dates to learning to love the park – has meant the dating scene has remained strong. For many, it’s been a chance to reconnect with what they really want out of life, whether that’s settling down or staying single. And as we look forward to a world of cupid without coronavirus, perhaps some of our new virtual habits will be here to stay.

We surveyed 1,000 single people in the UK to understand their dating habits prior to and during the 2020 coronavirus pandemic. We also asked them their thoughts on dating post-lockdown, and how their views on relationships had changed during the pandemic.